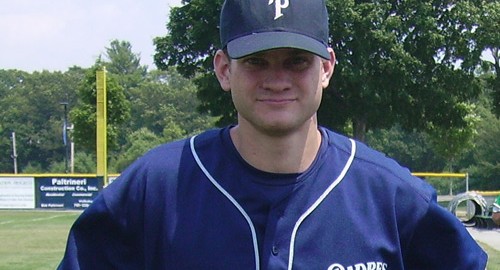 “Anytime he’s at the plate, you always know something special is going to happen,” Neal said.

In the first semifinal game against Palmer, with the score tied at 1 in the bottom of the seventh, Ross led off with a triple and later scored the winning run. In the fourth game of the championship series against Stockyard, Ross scored a game-tying run in extra innings and came back an inning later to crack a bases-loaded single.

The Padres moved on to capture the best-of-seven series in seven games.

A left-handed hitter, Ross showed his offensive prowess in college at the University of Maine at Orono. He was the America East Conference Rookie of the Year in 1999 and helped the Black Bears capture the conference title in 2002.

Ross first joined the Padres in 1997 and has remained one of the team’s core players since.

With each season, the 28-year-old Ross has proven his ability. Last season he was selected the MVP of the Park League, which is the oldest amateur baseball league in the country. He also can chip in at first base when needed.

“I still enjoy playing with the guys,” said Ross, who first joined the Padres when he was a junior at Foxborough High School. “The last three years it’s pretty much the same team.”

Now an accountant working in Cambridge, but still residing in Foxborough, Ross said playing is a time commitment, but he cannot give up the competition.

The Padres (19-13) needed a little bit of help from everywhere to pull off the team’s first championship. In July, the team struggled through a seven-game losing streak, but responded with a 12-game winning streak to end the season and earn a playoff berth. The players rode that momentum through the playoffs and captured the title that had slipped away in last year’s final.

“These guys lost 20 games five or six years ago, and they stayed together and worked together,” Neal said. “… Overall it was a just a complete team effort and each and every player on our team contributed to our championship.”

Ballplayer Awaits Call To The Pros; Braintree Slugger, A Star At Trinity, Is Being Scouted

We Could Have Survived

For The Love Of The Game