It’s a sultry summer night, and the collision of wooden bats and hurtling baseballs echoes around the cozy grass amphitheater of Fallon Field in Roslindale.

“Nice throw, Danny!’’ barks Franz Strassmann, the coach of Grossman Marketing, which is battling to wrap up a playoff berth. Scattered applause ripples from the metal bleachers behind home plate and from lawn chairs perched along the foul lines.

This is the Boston Park League, the oldest continuing amateur baseball league in the country, and a throwback to a slower era when neighborhood and company teams drew rabid fans to simple ballparks without towering video screens, luxury boxes, and gourmet concessions.

They also had pretty good ballplayers, too. 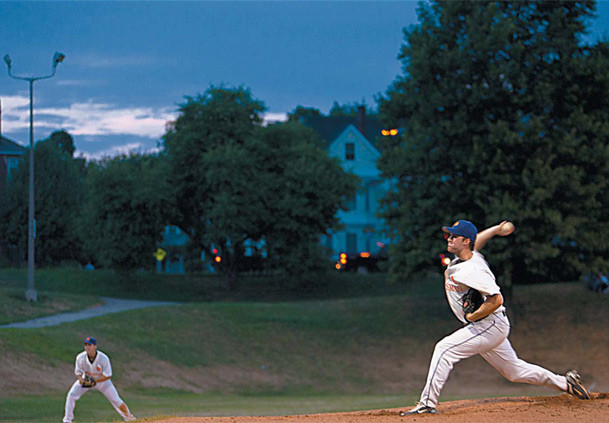 There are few frills but many thrills in the Boston Park League, which was founded in 1929 and
is the oldest continuing amateur baseball league in the United States.

That’s still the case in the nine-team Park League, where college players, a few former professionals, and grown men who cannot get enough of the sport play a 32-game regular-season schedule at four fields around the city.

“It’s summertime, and it’s baseball. What could be better than that?’’ asked Strassmann, a Belmont police officer who still steps into the Park League batter’s box at 52 years old. As of yesterday, Strassmann was hitting a healthy .295, not bad on a team with eight people who play for Holy Cross.

The allure of the league, founded in 1929, is that anyone who is good enough, and passionate enough, and dependable enough to stick out the season before only a few dozen friends, family, and neighborhood fans can find a home.

Take Eddie Delcarmen of Roslindale, the younger brother of Red Sox pitcher Manny Delcarmen. Eddie played first base on the recent night for the Carlson Club. Feeling the weight of an eight-game losing streak, Delcarmen fired his bat into the screen after taking a called third strike late in the game against Grossman.

It matters that much.

Before the game, as he loosened up in left field, Delcarmen, 25, gestured toward his teammates, five of whom he has known since childhood.

It’s that kind of enthusiasm that draws spectators to the games, which in addition to Fallon Field are played at Cleveland Circle in Brighton, Casey Field in Dorchester, and Kelly Field in Hyde Park. On this night, Ed Hoell, 57, walked a short distance from his home to set up a folding chair on an embankment behind third base.

At Fenway Park, the view would cost close to $100. Tonight, as at all Park League games, it’s free. The only things missing, Hoell said with a grin, are the concessions.

“I don’t know the teams, but what I like about it is the friendly competition. It’s amateur baseball at its best,’’ Hoell said.

The quality of the action drew John “Tinker’’ Connelly, 82, to a bench directly behind the plate.

And Connelly, a Needham resident, has seen his share. As coach of the Northeastern University baseball team from 1956-1981, Connelly’s squads made the NCAA Tournament four times and also appeared in the College World Series.

But tonight, with nothing at stake for Connelly, the enjoyment was simply the skill, strategy, and sounds of a game he loves.

That ambience also attracted Andy Cracknell, 46, a Roslindale resident who stayed a few innings while resting on his bicycle.

“I love watching the baseball culture,’’ Cracknell said. “I’m a traditionalist when it comes to baseball: the smell of tobacco juice, guys calling each other by their numbers, and thatsound! The sound of a ball hitting maple is the sound of summer. It’s great.’’

Cracknell, who is looking for work, said the games help him cope with unemployment.

“Volunteering, and getting out and exercising, and watching baseball take the edge off a little bit,’’ he said.

The spectators topped out at 30 for this game, scattered around the field from foul line to foul line. One person even watched Carlson’s Pablo Reyes, a 47-year-old who pitched a complete game, from under a tree more than 300 feet away.

Rick Salvucci, 53, had another idea. Sitting alone in a lawn chair off the right-field line, elevated on a small ridge, Salvucci had a nice view of his 19-year-old son, Northeastern student Rick Jr., as he played third base for Grossman.

“He loves it. He’s been playing ever since he was a little guy,’’ said Salvucci, who lives in Quincy.

Like Salvucci, parents are well represented among the fans. Gerald Anglin of Milton and John Findley of Duxbury leaned forward with every pitch as they watched their sons — Nat and Dan, respectively — battle against Carlson.

There’s no seventh-inning stretch in these seven-inning games, and fans will not find a mascot. But they will find an alternative to the frenetic, high-stimulus atmosphere that envelops most professional sports. And the price is right.

On this night, Carlson rallied for four runs in the seventh to put away Grossman, 6-3, and end its long losing streak. The players left the field, the fans dispersed, and the lights went out on Fallon Field.

Copyright © 2010 Boston Globe, all rights reserved. Written by Brian MacQuarrie, and reposted with his permission.