Latest News
You are here: Home1 / Latest News2 / Frontpage Article3 / Like Songins before him, J.P. Can Play the Game

A star at Walpole High who belted two homers in one game against Bay State Conference rival Natick his senior season in 1995, Songin went on to record a .402 average in his final year at Georgia College in Milledgeville, Ga.

‘My only regret is that the great athletes in the Songin family seemed to be six-footers and I’m 5-foot-6, which didn’t exactly wow the scouts.’

Two years later, Songin began to man the outfield for Palmer, the only Park League team he’s ever suited up for and which he has managed for four seasons.

The Songin name is a familiar one in Walpole and beyond. 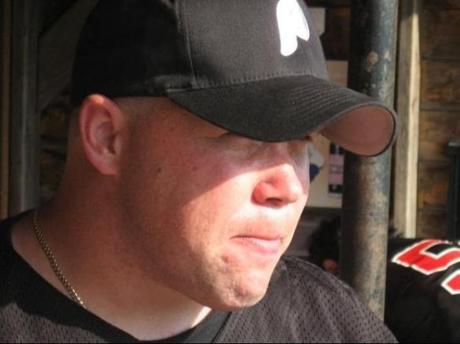 J.P.’s great uncle, the late Ed “Butch” Songin was an All-American hockey player and All-East quarterback at Boston College who went on to call signals for the original Boston Patriots.

His uncle Tom Songin led all NCAA Division 1 players in home runs as a BC freshman, starred on the ice for the Eagles, and played in the late 1970s for the Bruins.

And J.P’s late grandfather Walter “Wally” Songin was a superb all-around athlete who led Walpole High to the 1943 state hockey title and played semiprofessionally for three more decades. He was also popular in town as manager for 33 years of VFW Post 5188.

“Wally always joked that he was the first number 4 before Bobby Orr,’’ said his grandson.

“My only regret,’’ added J.P., “is that the great athletes in the Songin family seemed to be six-footers and I’m 5-foot-6, which didn’t exactly wow the professional baseball scouts when I was coming out of college.’’

Songin, who wears No. 11 for Palmer — the same number Butch Songin wore on the football field — played hockey until his junior year at Walpole High before focusing on baseball under coach Bill Tompkins, who just completed his 34th season at the helm of the program.

He also played baseball at Massasoit Community College of Brockton prior to enrolling at Georgia College.

Songin, who works for the Town of Walpole’s building maintenance department, also plays in an over-30 league with the Boston Bombers.

He was batting .333 (8-for-24) with nine RBI’s in seven games for Palmer — and of course, just one whiff — but jammed his wrist while attempting a diving catch in right field.

The Boston Park League, founded in 1929, is the oldest continuous amateur baseball league in the nation.

“Adam needed the time to help raise his family,’’ said Songin, who is single. “He still lives in Walpole and celebrated the birth of his second son on Father’s Day.’’

“When my bat can’t catch up to the young pitchers in our league I’ll know it’s time to stop,’’ added Songin, who is no slouch on the bases, either, with 40 stolen bases in 43 attempts the last six-plus seasons.

“But I definitely don’t want my baseball career to end with an injury, so if I don’t make it back this season, I’m definitely coming back next year.’’

Geary was the only representative from the Massachusetts State Collegiate Athletic Conference chosen to the regional all-star team. She scored 44 goals and added 22 assists while starting all 20 games, and also broke the program single season record with 188 draw controls — which ranked fourth nationally.

A 2013 MASCAC Rookie of the Year and first team all-conference selection, she helped the Bears capture the inaugural MASCAC regular season and tournament titles and advance to the NCAA Division 3 tournament for the fourth straight season.

Here and there
The Wheaton College women’s soccer team, winners on the field last year with an 18-2-6 record and a berth in the NCAA Division 3 tournament, has what it takes off the field as well.

The team has donated several sets of uniforms to Soccer Without Borders in Granada, Nicaragua. The organization uses the sport as a means for helping underserved youths to overcome obstacles.

The donated uniforms will be used at soccer camps, coaches clinics, and local gym classes.

Written by Marvin Pave, who can be reached at marvin.pave@rcn.com.

We Could Have Survived

Kevin McGlinchy Holds Out Hope For Another Shot At The Pros