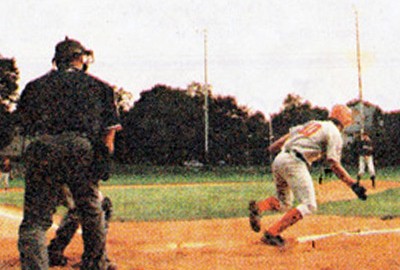 The Boston Park League ripe with all kinds of baseball players – and stories. 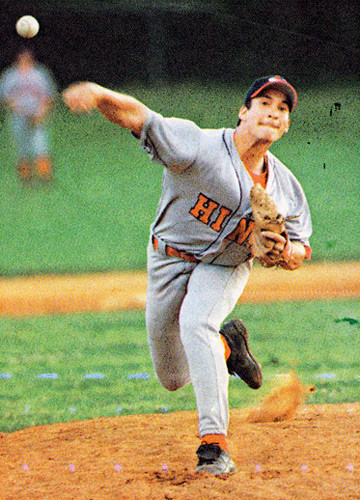 Pitcher Jaime Quiros of the Hines/ADSL (All-Dorchester Sports League) was fanning Chathams Rowe batters on record pace during a game late last month. As fate would have it, the leagues reigning record-holder, Jim Collyer, serves as Quiros’ Hines/ADSL pitching coach. Collyer recorded 16 strikeouts in a game in 1953, and watched with more than a passing interest as his latest pupil, a former Boston College hurler, continued to mow down batters.

By the close of the fifth inning, Quiros had 14 K’s on the board, and two innings left in the seven-inning contest to break Collyer’s record. Then he struck out the first batter in the sixth. By the end of the inning, the 22-year-old hurler had rung up 17 K’s and the new record before being removed an inning later.

“I would have looked great pulling him out before the record, huh?” Collyer said with a laugh last week. “But that’s what (records) are there for– to be broken. We waited until he hit the 17th before we took him out. He was up to 115 pitches (in the seventh). So it was time to go and save his arm.”

Too bad the game couldn’t be saved along with it. Remarkably, Quiros did not record a win with his magical 17-strikeout performance. Talk about flukes, Hines/ADSL wound up settling for             5-5 tie, even though it was ahead. 6-5, in the top of the eighth inning. Why? The lights at Casey Town Field went dark at 11 p.m., so the score reverted back to the end of the previous inning.

How’s that for a whopper of a story to tell your grandchildren? Welcome to the Boston Park League.

Spend an evening at any of the five public parks utilized by the league (Town Field in Dorchester, Bill Stewart Diamond in Roslindale, Cassidy Playground in Brighton, East Boston Stadium and Kelly Field in Hyde Park) and you’ll hear plenty of wonderfully quirky tales like the one Quiros just wrote.

Diamonds in the rough
That’s part of the charm of any baseball league. The Boston Park League, however, has that element and much more.

On many of the nine teams that comprise the league – which ranks as the longest-running amateur baseball league in the country – it’s not unusual to find 18-year-old kids playing with 30- and 40-year-old adults. Along with ethnic diversity, the league is rich with age diversity, not to mention career diversity.

You’ll find recent high school graduates or college players looking to improve their games and/or get noticed by big league scout, combined with former minor leaguers and ex-pros who still want to play, combined with players who simply have a love for the game.

Collyer, who has the distinction of having pitched in the league over the course of five decades (the 1940s through the ‘90s), perhaps knows better than anyone the beauty of the league, the characteristics that make it so special to so many people.

You get to have a lot of experiences and thrills people can’t really imagine,” said Collyer, now 73. “One time we were in the middle of a game, we saw sirens going down Geneva Avenue, spinning around with all this crime, and I turned to Josh (Powell, the Hines/ADSL manager) and said, ‘I feel like I’m in a glass bubble. We’re in a world by ourselves’ — which it really is when you get out on the field. Here, you have kids that love the game so much, they don’t want to throw away the gloves.”

The image of that glass bubble doesn’t seem too far-fetched, especially when you take in one of the games. For a few hours a night, the players are in a world of amateur baseball that has few rivals. 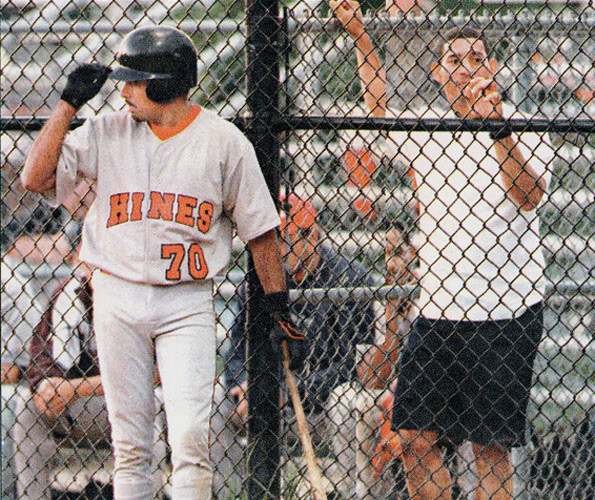 Ernesto Orledo of Hines/ADSL waits on deck for his turn at the plate.

Deep-rooted loyalty
Steve Pecevich, who sponsors, manages and plays on his Chathams Rowe club, has been involved with the league nearly 20 years.

Long before he knew a baseball from a badminton shuttlecock, his grandfather laid the foundation for Town Field. The league is in his blood. That’s why when it needed a new sponsor before the season, he stepped to the plate and delivered.

“There’s something about the smell of a ballfield that drags us all down here,” said the 37-year-old Pecevich. I know for me, I just can’t get away from it. I love baseball, but in this league, along with the game, there’s a camaraderie especially when I think about the friendships I’ve made over 19 years. I didn’t want to see the league lose a team. So, out of my fondness for the league, as well as baseball, I almost felt obligated to step in.”

Jay Delaney, who recently won a state championship with BC High and is headed to Boston College in the fall, says the league provides the perfect summer transition between high school and college athletics. It puts him in an atmosphere to become a better player. But that’s only part of it. The benefits are much more profound.

It’s an absolute great experience playing in this league. For a kid like me, a South Shore kid, it has all the benefits of the world,” said Delaney, who hails from Hanson. “It’s not like BC High where there’s a lot of pressure to succeed. We have a blast here.

“And there are a lot of guys who speak Spanish. I have no clue what they’re saying. They’re probably joking about me, but it’s all part of the experience. It adds to the fun.”

The league was founded in 1929. Originally, it was funded P the City of Boston, and later sponsored by Budweiser for a few years during the mid ‘80s. Eventually, the Thomas Yawkey Foundation — one of the legacies of the longtime Red Sox owner — began sponsoring the league along with individual sponsors.

In the 1930s and ‘40s, according to various accounts, regular-season games attracted upward of 5,000 fans at area parks. In the ‘50s and ‘60s, it wasn’t unusual to nearly double that total for playoff games.

Nowadays attendance has dropped off considerably. Bleachers are mostly sparse during games. Competing recreational leagues and a multitude of entertainment choices have seemingly cut into the fan base. Whether the stands are filled or not certainly doesn’t affect the high quality of play.

I know the attendance isn’t anything like it was in the past,” Delaney said. “It used to draw big crowds. Games were the center of attention. It’s a shame that’s gone away, but it’s still great baseball, and it’s stilll great for us.”

The league, which has each team play a 32-game schedule, also returned to the use of wooden bats two years ago after spending many years beholden to the ping of aluminum bats.

“Wooden bats separate the men from the boys,” remarked Jose Alicea of the Mass. Envelope club. “You can get cheap hits with aluminum bats. With wooden bats, you really have to put a solid swing on the ball.”

Said Collyer: “Josh and I lobbied to bring it back so the kids weren’t thinking about the Cape League all the time. We wanted to bring the kids who couldn’t play there — ‘cuz there’s no room — to play here so they could be seen. You need to play with wood to get to the majors.” 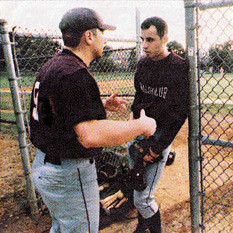 Eric Wirtz of Walsh Club gets advice between innings.

Pushing the Envelope
Last season, Mass. Envelope won the league championship. That club features 44-year-old Rosendo “Junior” Rentas, who, as legend has it, was briefly with the Red Sox organization back in the ‘70s.

Mass. Envelope also had Manny Delcarmen, the West Roxbury High pitcher who was selected by the Sox in second round of last year’s amateur draft, and Chino Roman, who was undefeated (14-0 with a 0.77 ERA) during the championship ride and is currently 6-1 this season.

According to Mass. Envelope manager Rich Figueroa, scouts now come by to watch another pitcher, 22-year-old Noel Hemandez of Lowell.

“He’s a righty who can throw 95 mph,” Figueroa said. “He’s already had a few offers from Seattle. They’ve had scouts here watching him.”

Zach Soolman, Tommy John Surgery, and The Love of the Game
Scroll to top