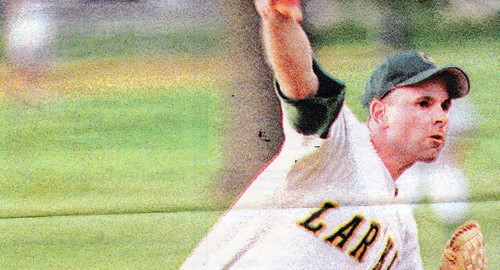 If Zach Soolman’s true baseball ambitions had been realized, he’d have been pitching for the Red Sox last summer, perhaps working in step with Pedro Martinez in the rotation and giving New England baseball fans a dazzling 1-2 pitching punch: Zach and Pete, and pray for sleet, or some such pressbox contrivance.

But fantasy is fantasy, and real life is real life. And for Zach Soolman, in hisa 28th summer, real life meant working in the consumer marketing department for Gorton’s Seafoods, and, just for kicks, pitching for the Larkin Club in the Boston Park League.

Soolman has been pitching pretty much his whole life, from Little League bandboxes to Needham High School to Tufts University. His college career ended with his graduation from Tufts in 1995, but he never stopped pitching. Going into last season, he had been a Park League mainstay for nine years. 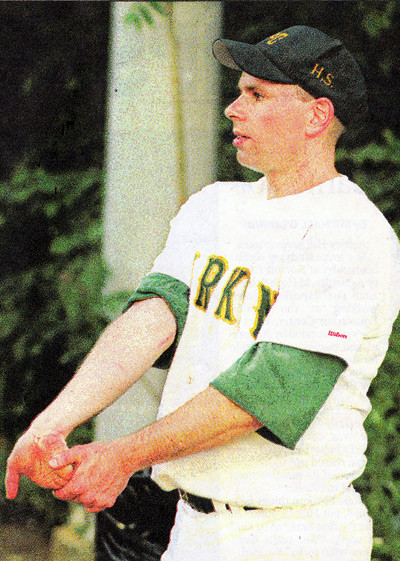 Pitching for Larkin Club against Avi Nelson Club at Cleveland Circle – known as The Circle in Park League parlance – the veteran right-hander entered the game with a 4-2 record and the league’s lowest earned-run average. A man somewhat out of place in the youthful Park League, what with his receding hairline, his gritty, workmanlike expression and just a hint of middle-age girth, he had been mowing down these college boys all summer, mixing good stuff with an oldtimer’s keen understanding of the game.

Soolman had just pitched back-to-back shutouts. He had never been happier to be on the mound.

But then, on that late July evening, with a runner on first, while delivering a fastball to a left-handed hitter, “trying to rear back for something extra,” he felt a pop in his elbow. Soolman tried to stay in the game, but … “I threw two fastballs that came out like changeups,” he said. “I knew something bad happened. Something real bad.”

A couple of days later, Soolman was examined in Dedham by Dr. John Tierney. He later underwent an MRI. The findings were grim: Soolman had suffered a tear of the ulnar collateral ligament, located on the inside of the elbow.

This is where Soolman should have handed in his uniform and sought other recreational interests. His career at Gorton’s was moving along nicely, after all, and, hey, the guy’s engaged to be married to a swell gal named Jan Velco. And, you know, there are some really fun softball leagues around.

“But I was not going to allow my baseball career to end that way,” Soolman said. “I didn’t want my last pitching memory to be one in which I walked off the mound, holding my elbow. I wasn’t going to leave the game hurt.”

Soolman said he’d be back. His friends told him he was nuts.

Within weeks, Soolman was in a hospital in Birmingham, Ala., undergoing ulnar collateral replacement surgery, otherwise known as Tommy John surgery.

Performing the operation was none other than Dr. James R. Andrews, one of the nation’s most famous and respected orthopedic surgeons. This is a man who does much of his work with big-league stars who are trying to rescue multi-million-dollar careers, players who then undergo arduous rehabilitation programs in hopes of returning to The Show.

Somehow, Dr. Andrews was talked into performing Tommy John surgery on a 28-year-old Boston Park Leaguer whose only ambition was to make it back to The Circle.

Another miracle recovery
Tommy John was a 20-year-old lefty when he broke into the big leagues with the Cleveland Indians in 1963. He pitched with varying degrees of success over the next 11 years, never winning more than 16 games in a season.

When he ruptured his ulnar collateral ligament on July 17, 1974 while pitching for the Los Angeles Dodgers in a game against the Montreal Expos, it was feared his career was over. Instead, he and Los Angeles-based Dr. Frank Jobe made sports – and medical – history.

Extracting a tendon from John’s right arm, Jobe used it to replace the damaged ligament in the pitcher’s left arm, the money arm. Drilling holes above and below the injured elbow, Jobe attached the tendon in John’s left arm, and then everyone hoped for the best.

Since then, Tommy John surgery has been performed on thousands of athletes, including those at the high school and college levels. Other surgeons now specialize in the procedure, including Dr. Andrews, who is based at the Healthsouth Medical Center in Birmingham, Ala.

Try telling that to Zach Soolman. Confronted with the reality that he’d need the surgery to continue pitching, he decided he wanted the best in the business to do the cutting. So he sought out Dr. Andrews, whose many successful patients include Atlanta Braves closer John Smoltz.

When he finally spoke with Andrews, the surgeon was brutally frank, telling Soolman: “You’re 28 years old. You’re an amateur pitcher. This is going to be a lot of work. Are you sure you want to do this?”

“Yes,” said Soolman. “I’m not ready to give up baseball yet.”

On Sept. 6, 2001, a little more than a month after the injury, Soolman was on a plane for Birmingham, accompanied by his parents, Arnie and Sandy Soolman. Having watched their boy pitch since his days in the Needham Little League, neither did they want Zach’s career to end on such a sour, somber note.

“The thing I remember most about Zach Soolman,” said Andrews, “is what a great guy he is. He’s a genuine person, and he was serious about getting the surgery done.

“He had written me a two-page letter, and when we talked, he had all these questions. I’ve been doing this (Tommy John surgery) for 15 years. I do maybe 100 a year. But you don’t get many like Zach. He was as passionate about getting this done as a Roger Clemens would be.”

The expensive surgery, which was largely covered by health insurance, was performed the day Soolman arrived in Birmingham. When they wheeled him into the operating room, Soolman asked Andrews to give him a couple of extra miles on his fastball – which, believe it or not, is often a welcome byproduct of the surgery.

No holding him back
The morning following the surgery, Soolman was undergoing physical therapy at Healthsouth. But he wasn’t alone: Undergoing the same regimen was Pittsburgh Pirates pitcher Francisco Cordova, who, it turns out, had undergone Tommy John surgery performed by Andrews immediately following Soolman.

“He didn’t speak a word of English,” Soolman said. “His agent was with him, and we communicated through him. (Cordova) was in good spirits, but I’d say he was more serious about it all than I was, and that had to be indicative of the fact that he was trying to come back and earn a living, versus someone who was trying to come back and have fun. But we were both going through the same thing that day.”

Two days later, Soolman returned to Boston, and to his job at Gorton’s – and to faithful girlfriend Jan Velco. He also began making regular pilgrimages to POST Physical Therapy in Brookline, where he continued the rehabilitation that had begun in Birmingham.

One day – and Soolman remembers the exact date: Nov. 15, 2001 – he received some news from physical therapist Michelle Gomes.

“You don’t need us anymore,” Gomes told Soolman. “It’s up to you now.”

“That,” recalled Soolman, “is when I knew I’d be pitching in the Park League this year.”

Had Soolman been a big-league pitcher, he’d have spent the entire season in rehabilitation, with perhaps a few late-summer stints in the minor leagues. But since no World Series appearance is hinging on Soolman’s return, he simply waited until the weather turned warm and returned to the Park League.

“When he told me he was coming back I told him he was a complete lunatic,” said longtime Larkin Club coach Bill Mahoney. “I couldn’t believe a Tufts graduate could come to me with that kind of thinking.”

On June 10, Soolman returned to the hill. He was on the same field – the hardball diamond at The Circle – and facing the same opponent, though the Avi Nelson Club is now known as the Cannon Club.

“I’m going to put you on a pitch count,” Mahoney told Soolman.

“You don’t need to. I know myself,” replied the man with the rebuilt right arm.

“No, I know you,” Mahoney fired back.

Soolman took the mound. The game began. His first pitch was a strike. Soolman smiled. He was back … even if being “back” meant pitching in the Boston Park League.

Soolman came into this season with 55 career Boston Park League victories. He’d like to hang around long enough to win 100 games.

“Well, that would be five or six victories a year over the next eight, nine years,” said Mahoney. “That would be awfully tough. He’d have to vulture some wins in relief, I guess. But you know what? If anyone can do it, Zach can.”

Who knows what the future holds? Soolman’s career with Gorton’s could hold him back from the ballfield, and, anyway, there is his impending November marriage to Velco. When the young couple starts raising a family, those weekly trips to The Circle could become rare.

Then again, the great Tommy John himself raised four children … and was still pitching for the Yankees when he was 45 years old.

Copyright © 2002 Boston Herald, all rights reserved. Written by Steve Buckley, and reposted with his permission.