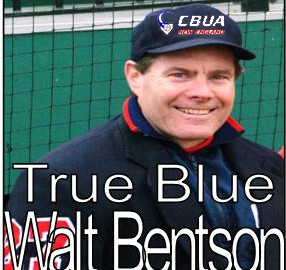 But even very good umpires do not have eyes in the back of their heads. So let’s say a game is being played at, oh, Somerville’s Trum Field, and let’s say some Yawkey League hothead tries to turn his helmet into the Delta Shuttle after popping out to short, and let’s say that, at that precise moment, the plate umpire happens to be admiring the design of the Somerville Public Works Building, which is located out beyond the left field fence.

Under these circumstances, this is what happens: Nothing. The hothead gobbles up his helmet and returns to the bench, the next hitter steps up to the dish, the game continues.

And so it is that we introduce Walter Bentson, a longtime umpire on the New England amateur baseball scene who has carved out a richly-deserved reputation as a hardball arbiter with that rare blend of keen eye, solid judgment and refreshing temperament.

Players have long been accustomed to seeing Walter Bentson in his spot behind home plate.

“I’m a feel-the-love kind of guy,” says Bentson, a trim, well-groomed 52-year-old who, when he’s not umpiring baseball games, works as a security guard at the Museum of Fine Arts School. “I try to think as the players think. And if I were up at the plate, and there were two outs and the bases loaded, and a tie game, and I popped out, then, heck, maybe I’d throw MY helmet.

“You have to throw a guy out in a situation like that. But if I’m walking up the third-base line or I’m cleaning off the plate and I miss what happens, there’s nothing I can do except keep the game moving.”

Feel the love. Keep the game moving. But if it sounds like Walter Bentson is a throwback, a 1950s-style baseball official with a ready smile who doesn’t have a problem in the world and who umpires for the sheer love of the game … well, you’d be only half right.

The part about umpiring as a vehicle to embrace baseball? Bingo. That’s Walter Bentson. The guy always has been a baseball zealot, going all the way back to when he was a kid whose family moved around a lot and continuing through his brief tenure in the early 70s as a shortstop on the Boston College varsity. (“I think I had one at-bat, and that was that,” he says. “I was a little guy who backed up two big guys who could play.)

Minor concessions
But this not a man without problems. It just seems that way, given his rosy outlook on life. Five years ago, after the nagging pains in his legs finally reached the point where he grudgingly went to see a doctor, he was diagnosed with primary lateral sclerosis, which according to a PLS Web site is “a degenerative upper motor neuron disease characterized by a gradual development of muscle weakness.” While not necessarily life-threatening, as is amyotrophic lateral sclerosis (Lou Gehrig’s Disease), PLS is surely LIFESTYLE threatening, as it wears down muscles and can cause slurred speech and fatigue.

But PLS has been unable to keep Walter Bentson off the ballfield. Though he can’t dance around the bases as he once did, Bentson still works the plate several nights a week and on weekends. The one concession he has made is to retire from doing games in the high-stakes Cape Cod League, an annual summertime showcase of some of the nation’s top collegiate players.

“I was doing a game last summer, and there was this one play that seemed to be telling me it might be time to stop doing the Cape games,” he said.

“The ball was hit to right field,” he said. “This kid out there with a major-league arm came up with the ball and threw home. This kid with major-league speed is rounding third. The pitcher with the major-league arm is running to back up the plate, the 6-foot-5 catcher is stepping in front of me to get the throw and the on-deck hitter is running up to remove the bat.

“On top of all that, I’m not moving very well,” he said. “I was worried that sooner or later, with all these big kids running around, I’m going to get caught in the middle and end up in the second row of the bleachers.”

A decision was made, right there on the field: He’ll always love the Cape Cod League, but, come 2005, he’ll stick closer to his Jamaica Plain home and work the Yawkey League and Boston Park League.

Near the end of last season, the Cape Cod League honored Bentson as recipient of the first Curly Clement Award, given to the league’s top umpire. Come Tuesday night at Bay Pointe Country Club in Onset, the Wareham Gatemen will honor Bentson at their annual preseason “icebreaker” dinner.

Says John Wylde, longtime general manager of the Gatemen: “Walter is a friendly, outgoing, boy-am-I-happy-to-be-umpiring kind of guy, yet he’s dealing with things that give him every right not to feel that way.”

While he has pared the Cape Cod League from his schedule, Bentson still has, if you’ll pardon the expression, a full plate. He continues to ump in and around Boston, as well as serving as umpire in chief for the Boston public school system. He’s also vice president of the College Baseball Umpires Association of New England and somehow finds the time to serve as president of the Boston Park League.

“He’s amazing,” says longtime amateur umpire Joe Driscoll, an Arlington native whose own resume includes three trips to the College World Series. “You can’t get him off the field. The way he’s handling this thing tells you all you need to know about the guy. He’s no quitter.”

Signs of trouble
As far back as 1999, Walter Bentson knew something was wrong. The guy had been umpiring amateur baseball games throughout New England for years, and he had earned a reputation for being one of the good ones, both in terms of judgment and temperament. Away from baseball, he was a skilled downhill skier who happened also to be a deft, competitive ten-pin bowler, but now he was concerned: There were days and nights when he was a little slow getting into position to make a call, to say nothing of the fact that on too many occasions his legs were just plain sore.

“So Walter Bentson did what, to him, was the right thing. He did nothing.

Soon, others noticed things were out of sorts. He was having trouble on the slopes. On his nights out at the bowling alley, his delivery had changed. That fall, Bentson and his wife, Mary, attended the Boston Park League’s annual banquet; when Walter was called up to the dais to make a presentation, Mary noticed the way her husband was walking and made known her intentions about a trip to the doctor.

“She said I walked like I was drunk,” said Bentson, again choosing to see the lighter side of things.

“I honestly don’t think that’s how I put it,” said Mary. “But I did let it be known he should get a checkup. To me, it started with the skiing, not with baseball. And at first, we thought it was the typical athlete’s story – that his knees were going on him.”

An appointment was made with an orthopedic doctor. It was eventually determined that a visit to a neurological specialist was in order; after the diagnosis was made, doctor’s appointments became as much a part of Walter’s daily life as working the plate at a McKay Club-Alibrandi’s game in the Yawkey League.

These days, Bentson takes the trip to the doctor – make that DOCTORS – in stride. As recently as last Tuesday, he had five appointments in one day, yet, while shuttling from office to office, doctor to doctor, appointment to appointment, he still managed the mean feat of keeping track of his family and making sure a hundred different umpires all got to the right ballpark that night.

Walter and Mary’s son, Christopher, a student at Boston College who studied at Trinity College in Ireland this past semester (“He was majoring in Guinness Stout,” says the old man), will be returning to Boston next week, and Mom and Dad are looking forward to having the entire family together.

As for Lauren, 18, she just finished her freshman year at Franklin Pierce College in New Hampshire.

“I know this sounds cliche,” she said, “but he’s a great dad who cares about us and loves us. But now that school is out for the summer, he’s been telling me I have to earn my keep. So he helped me get a job.”

Three guesses as to what that job might be.

“He has me umpiring youth softball games in Dorchester,” said Lauren. “He’s been working with me on umpiring techniques.”

Job. Family. Umpiring. Doctors. How does Walter Bentson do it?

“In a word, he’s tenacious,” says Mary. “But he also has this portable office he carries around with him. We came out of a doctor’s office today, and right away he had three cell phone messages waiting for him. At the next appointment, he’s in the waiting room, setting up his portable office, moving umpires around, making sure they’re at the right park, and so on.

“Sometimes I point out the sign in the doctor’s office that says no cell phone calls are allowed,” says Mary. “He’ll just say, ‘Oh, that’s not for me. That’s for other people.'”

Out of the ordinary
It has been said that umpires do their jobs best when they fade into the background of the game being played. If you’ve just watched a baseball game, be it the Little League or the big leagues, and you have little more than a fuzzy recollection about the umpires, then those men in blue did their jobs well.

Walter Bentson is the exception. He never seems to get into heated arguments with coaches or players, never gives the old heave-ho, never gets followed to his car by angry fans who’d like to offer a few choice words about his strike zone. Yet everyone knows the guy.

“I’m one of the few people Walter ever threw out of a game,” said Dave Treska, who plays for Alibrandis in the Yawkey League. “I didn’t like a third strike call. I dropped my bat in front of him, and he tossed me.

“The next time he umped one of our games, he walked up and said hello like nothing had happened. And this was before he was sick, so that had nothing to do with it. He was just being who he is. That’s why we like him so much.”

Copyright © 2005 Boston Herald, all rights reserved. Written by Steve Buckley, and reposted with his permission.

Kevin McGlinchy Holds Out Hope For Another Shot At The Pros