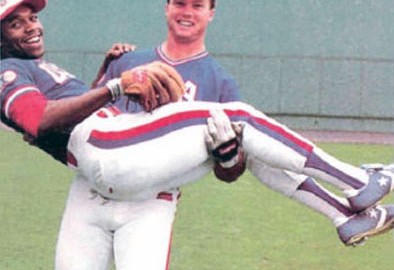 “The only thing I get tired of is getting up early,” Clark said. “Everyone is dragging.”

Clark, a lefthander from Mississippi State, managed to drag himself to the plate to hit three of the US squad’s six home runs. The first came in the first inning, which started ominously for the Park Leaguers, a collection of collegians, ex-collegians and ex- professionals.

Then pitcher Paul Cacciatore threw wildly on a pickoff try, and Whall slipped onto his back chasing the ball.

After Shane Mack drilled a single to center field, Clark homered to right.

And although those runs were all former Canton High School pitcher Bobby Witt would need to gain his second victory, the Olympians gave him one in the second and nine in the third.

“They (Olympians) looked like a team that has been together,” said Park League pitcher Mike Smith. “We had had only one or two workouts.”

Smith started the third by giving up a home run to center. Clark again.

“Those guys really swing a good stick,” said Smith, who spent six years in the Atlanta Braves’ organization until 1982. “Not many holes.”

Smith: “Boy, it’s hard to keep your head in the game when you’re getting tattooed.”

Then John Marzano, the Red Sox’ first-round draft pick, tripled, and Gary Green and Flavio Alfaro doubled. It was 9-0.

More Smith: “I wanted to crawl under the mound.”

Somehow, Smith mustered enough stuff to get the next two batters out. Then Mack ended the string with another homer.

“The coach came out and asked me how I felt,” Smith continued. “I told him to get me the hell out of there. They asked me to pitch in this game last week. I made them look bad, didn’t I?

“I think the Olympians are comparable to good minor-league players. I think I might ask them if I can be their batting- practice pitcher.”

It didn’t end there. Dave Barry relieved Smith and pitched to Clark and Mark McGwire. They played Ping-Pong. That’s the sound of home runs with aluminum bats, McGwire’s thundering into deep center. The score was 13-0.

“I don’t think aluminum bats should be used in college,” said US manager Rod Dedeaux. “It’s changing the game. Hitting six home runs out of Fenway?”

Dedeaux said his club is coming together well, despite the daily travel. “It’s like a crash program,” he said. “I would like more time to work on fundamentals. But the towns are embracing us, and that makes me tingle.”

The University of Maine’s Billy Swift, who entered with a 2-0 record and 1.50 ERA, pitched two innings, yielding run-scoring singles to Park Leaguers Don Cahoon and Charlie Ferro in the third.