Louie DiTullio, BPL Hall of Fame pitcher 1997 passed away on April 28, 2014 in Florida.  Louie was an outstanding left handed pitcher for the Carlevale Braves and the Supreme Saints.  He also played for the Easton Huskies of the Cranberry League and later became the League Commissioner.

A memorial service will be held for BPL Hall of Famer Louie DiTullio at St. Joseph’s Church, Holbrook, Tuesday, May 13th at 9am. 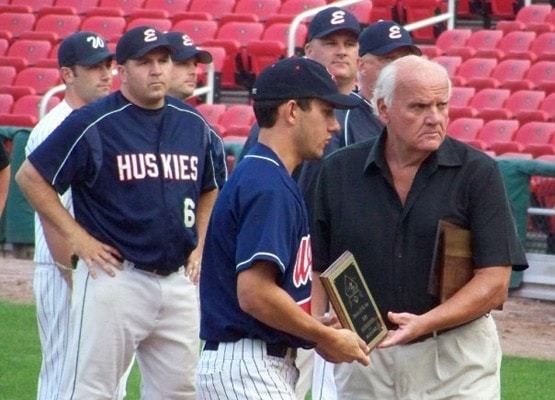 Ken Lechtanski from the Brockton Enterprise wrote this:

The Cranberry Baseball League has been home to dozens of teams over the years, serving as a hardball brotherhood to hundreds of amateur ballplayers.

So, like any extended family, members of the CBL are mourning the loss of commissioner Louie DiTullio this week. The 69-year-old lifelong Holbrook resident not only was a Cranberry League all-star player, manager, ambassador and commissioner, but also its patriarch.

“He took it seriously and played the game the right way, in my opinion,” said former Easton Huskies player and manager Bob Wooster. “He kept the Cranberry League going for a lot of years. I’m sad to see him go.”

DiTullio died in Florida early Monday after several years of declining health, leaving the Cranberry League to carry on without one of its most celebrated and respected figures.

“He had a great passion for the game of baseball, both playing it and managing it, as well as in being the commissioner of the league and continuing that through his life,” Wooster said. “I think the big word is ‘passion’ and his love for the game.”

No one doubted DiTullio’s passion for baseball, which began in high school as a left-handed ace pitcher in the 1960s that led him to earn the distinction of being selected by the powerhouse Easton Huskies straight out of school.

“They very rarely took high school players, but he was one of the few who made the cut with them,” said CBL president Joe Paolucci.
DiTullio went on to have a long and distinguished playing career with not only the Huskies in the CBL, but also with the Brockton Royals and the Rockland Cardinals, where he managed as well. When the Cranberry League merged with the Boston Park League in the late 1980s, DiTullio became the first player to compete in both leagues.

Frank Niles, owner of the South Shore Baseball Club and Hingham High baseball coach, first met DiTullio when Niles was the player-coach for the Weymouth Elks in the early 1970s.

“He was a good player then and a fierce competitor, but a good guy,” Niles recalled. “He would fight you tooth and nail during a game, but when the game was over, it was over.

“Louie was one of those guys who was afraid of nothing.”

“He went at the game with a real intensity,” Wooster said. “I remember him as a player, being very fiery with the umpire – arguing, but doing it in the right way. The same with being a manger; he went at it with the intensity and the commitment that made him successful.”

After serving as a player-manager to close out his playing career, DiTullio took over as CBL commissioner in 1993 under the guidance of league founding father Connie Spillane. The Cranberry League soon became one of the most respected amateur leagues in the country. Following the merger of the South Shore League with the Cranberry League, area powerhouses such as the Easton Huskies, Braintree White Sox, East Bridgewater Royals and Rockland Cardinals annually battled for the state Stan Musial Tournament title with several teams advancing to the national amateur World Series.

“Those were elite teams, not only in Massachusetts, but nationwide,” Paolucci said. “It really put our league on the map, nationally.”
Much of the credit for that went to DiTullio due to his devotion to amateur baseball and his ability to instill the same respect for the game in those around him.

“I really learned a lot from Louie,” Paolucci said. “When I took over in 2007, I had a lot of ideas about how we could take the league into the next generation, especially with everything online at that point.”

“He let me do my thing, but at the same time, I always knew who the boss was. Louie was always the leader of the Cranberry League.”

Shortly after taking over as league president in 2007, Paolucci recalled how the league was having a difficult time with one of the franchise owners when DiTullio pulled him aside.

“I was carrying on a bit and maybe giving a bit too much of my opinion on this person when Louie stopped me dead in my tracks,” Paolucci said. “He said, ‘I’m hearing what you’re saying about him, but he’s dedicated a lot of his time and effort to baseball and that’s what we’re all about here.’ He made me stop and realize that this is amateur baseball. This isn’t professional baseball. Everybody’s here because we love the game and we are dedicating our time and effort to it. That’s something that he never forgot and that he tried to instill in me.”

Paolucci also remembered asking DiTullio if it would be alright if he took a small stipend from the league’s revenue to compensate him for his time and effort as league president.

That was not surprising to Wooster, who had come to know DiTullio over the past 30 years, both on and off the field.
“He put the time into it when he didn’t have to because he loved the game,” Wooster said. “You have to have a great passion for something and that’s why I stayed in it so long because we all have the passions for the game.”

As DiTullio battled various ailments in his final years, his appearances at league meetings became more sparse, but no less special to those around him.

“It was kind of like the godfather coming into the room,” Paolucci said. “Everybody stopped and listened to what he had to say.

“They all loved him and really respected him, which is the key to having a leadership position in amateur baseball.”

DiTullio, who became one of the first men to be inducted into the Cranberry League Hall of Fame in 1995 and was also a member of the Boston Park League Hall of Fame, got a taste of the pros as a left-handed batting practice pitcher for the Red Sox from 1970-72. During that time, he became the last member of the Red Sox to wear No. 14 before the arrival of Jim Rice in left field.

But amateur baseball, and the Cranberry League in particular, is what will be DiTullio’s legacy.

“His attitude never changed,” Paolucci said. “He just loved baseball. I loved going to games and watching him, and noticing the little things that Louie would notice about certain players or certain teams.”

Paolucci is uncertain in which direction the CBL will go in selecting its next commissioner when the board convenes to decide next fall, but he said something will be arranged to honor DiTullio this season when the Cranberry League embarks on its 54th season in May.

Ballplayer Awaits Call To The Pros; Braintree Slugger, A Star At Trinity, Is Being Scouted

A Faded Glory, But A Glory Of Summer Nonetheless