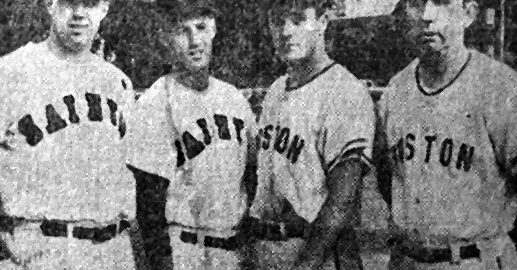 Tom Bilodeau Jr. passed away in October of 2017. Tommy had joined the Boston Park League Hall of Fame in 1988. END_OF_DOCUMENT_TOKEN_TO_BE_REPLACED

Back in the late 1950s, he was a spindly kid playing first base for Boston English High and for various Park League clubs at night. Today, after many years in both sandlot and organized ball, Walt Mortimer is the new executive director of the Park League.

“Some of the happiest days of my life were spent playing in this league,” Mortimer said. “Along with a lot of other interested alumni,’ I’m trying to help in any way I can to keep it going.”

Mortimer acknowledged that the league has had some rough sledding in recent years, particularly since the onset of Prop. 2 1/2 . “But with a lot of dedicated people pitching in, we have kept going, and I feel that this year I can say the outlook is better than it has been for some time.”

Mortimer said that the league will have nine solid entries, the same number as last year, with the season’s opener pitting defending champion Mass. Envelope against the Dick Conley Club on Monday, May 21, at 7 p.m., at Caseytown Field in Dorchester. END_OF_DOCUMENT_TOKEN_TO_BE_REPLACED

Boston’s best major league prospect has two strikes against him in realizing his lifetime ambition – to be a major leaguer. Only a handful knew why Walter Edward Mortimer Jr. isn’t in professional baseball where he belongs. The answer: He’s on baseball’s blacklist! END_OF_DOCUMENT_TOKEN_TO_BE_REPLACED

A member of the Bryan Club of the Park League he was signed up by Joe Cuick yesterday after a tryout in Waltham. Mortimer’s Park League batting average is .428. END_OF_DOCUMENT_TOKEN_TO_BE_REPLACED

Two upsets were recorded in the opening round playoffs last night in the Boston Park League when upwards of 30,000 fans jammed, four municipal ball parks to witness initial bids for the 1940 twi pennant. For perspective, the Boston Red Sox drew 29,209 that same night.