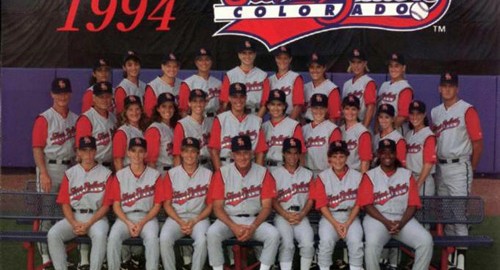 But one can see why the popularity of the all-female Colorado Silver Bullets is growing as they criss-cross America and Canada, making a statement that is much stronger than the movie of the same name. Their 6-0 loss to the Boston Park League All-Stars yesterday was not unexpected. What was surprising was that 5,200 went home convinced they’d been a part of history. END_OF_DOCUMENT_TOKEN_TO_BE_REPLACED

After 65 years of continuous existence, the Boston Park League has been many things to many people. The only thing that it remains for all those who have played and the present players, is family.

The Boston Park League, the nation’s oldest amateur baseball league, begins its 65th season tomorrow, and as usual, Milton resident and Mass. Envelope general manager John Kelliher will be part of the proceedings.

When Mass. Envelope won the league title last year, it marked Kelliher’s 11th Park League championship as either a manager or GM in a career that dates back to 1939, when he played for the old Hurley Club of Roxbury after graduating from Roxbury Memorial High.

“I’m retired from the MBTA now, so I’ve got more time to devote to baseball,” said the former Red Sox and Brooklyn Dodgers farmhand, “and I’m really looking forward to this season. Each spring, I kind of get rejuvenated because of baseball.” END_OF_DOCUMENT_TOKEN_TO_BE_REPLACED

Nine teams will play a 32-game schedule, according to Park League president Bob Powers, who, despite optimism about the caliber of competition, expressed pessimism about the league continuing to stay afloat financially after the 1993 season.

“We’re still attracting some of the top players in the Greater Boston area and beyond,” said Powers, “but their opportunity to play in this league beyond this year may be in jeopardy. We’re facing serious financial difficulty because of major reductions in funding {from the City of Boston} and services.”

According to Powers, the league — which consists of former professional players, current college and past college players and a few high school standouts — will survive financially this year, “but if we don’t get a corporate sponsor or find an alternative method of funding, the chances of survival past next year are slim at best.” END_OF_DOCUMENT_TOKEN_TO_BE_REPLACED

Chris Higgins pitched a complete game and catcher Tim Finnegan went 2 for 3, including a homer and single, to lead Towne Club to a 12-0 victory over Avi Nelson/ADSL and the Park League championship last night at Casey Town Field in Dorchester.

After losing the first game of the best-of-seven series, 3-1, Towne Club, rattled off four straight victories to take the title. END_OF_DOCUMENT_TOKEN_TO_BE_REPLACED

B.J. Flynn was sending the runner all the way. Flynn, the Hyde Park Sports manager and third base coach, was determined to tie the game.

Trailing, 1-0, to Triple D’s with two outs in the fourth inning, Hyde Park Sports had runners on first and second. Richie Figueroa clubbed a single to left, and Flynn began pumping his arm in windmill fashion. He was sending runner John Mazzocca all the way.

The throw from left fielder Jay Adams got to the plate about the same time Mazzocca did. But as catcher Mike Ferraro reached to tag Mazzocca, the ball squirted out of his glove and scooted away.

Mazzocca was safe, and Barney Earle came in to score behind him after the ball had gotten loose. Hyde Park had more than tied the game. It led, 2-1, and went on to cruise to an 8-1 victory last night at Stewart Diamond in Roslindale to take a 2-0 lead in the best-of-seven Park League championship series. Game 3 is 8 p.m. tonight at Kelly Field in Hyde Park. END_OF_DOCUMENT_TOKEN_TO_BE_REPLACED

“I played baseball in this league until I was 38,” said Kelliher, “and by that time I knew I had to stop because I couldn’t do it physically anymore. But Harvey’s eight years older than that and he just hit .392 for the season.”

Mass. Envelope missed the Park League playoffs by one game after a slow start, but Krupnick, a resident of Framingham who coached the Holliston High team to the Eastern Massachusetts Division 2 title last spring, didn’t miss a beat all season long. END_OF_DOCUMENT_TOKEN_TO_BE_REPLACED

The last time Hyde Park Sports pitcher Ted Novio took a shutout into the seventh inning, he did not finish the ballgame.

Instead, he was replaced with one out to go and had to watch a reliever surrender two dingers to spoil his string of goose eggs.

In last night’s opener of the Park League best-of-seven final, Novio wasn’t taking chances. The University of Maine senior retired Triple D’s in order in the seventh to close out a picturesque three-hitter, leading Hyde Park to a 2-0 victory. END_OF_DOCUMENT_TOKEN_TO_BE_REPLACED

Pablo Reyes hopes last night will be a preview of bigger and better things. Reyes, who plans to sign with the Toronto Blue Jays, pitched ADSL to a 12-2 victory over Hyde Park Sports last night in the seventh and deciding game of the Park League championships at a packed Casey Town Field in Dorchester.

Reyes aired it out from there, striking out five in the last three innings. Pinch hitter Ernesto Ovideo and DH Ken Pires blasted mammoth home runs over the right-field fence in the seventh.